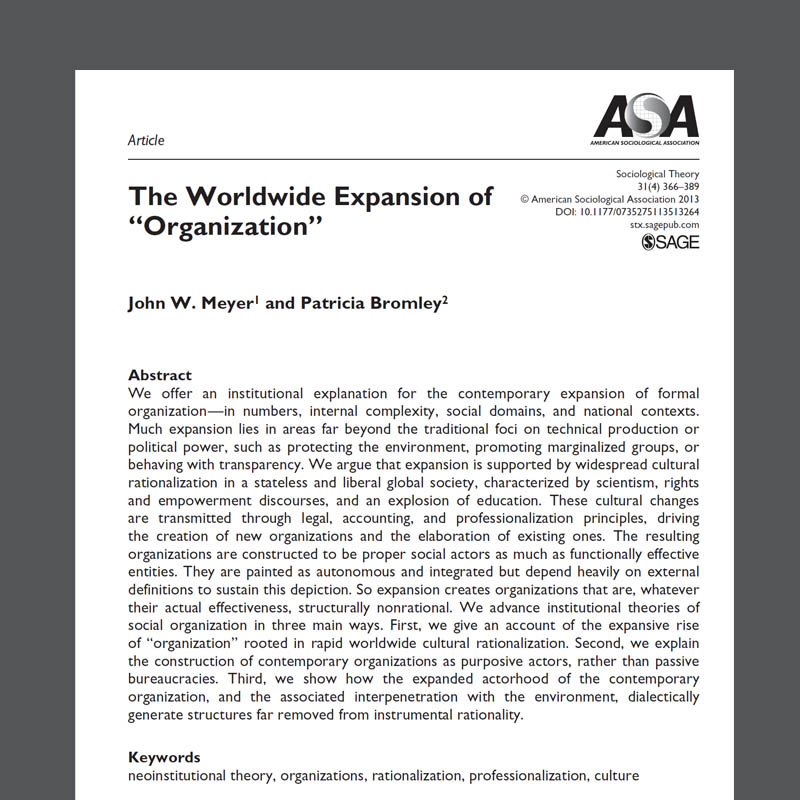 We offer an institutional explanation for the contemporary expansion of formal organization—in numbers, internal complexity, social domains, and national contexts. Much expansion lies in areas far beyond the traditional foci on technical production or political power, such as protecting the environment, promoting marginalized groups, or behaving with transparency. We argue that expansion is supported by widespread cultural rationalization in a stateless and liberal global society, characterized by scientism, rights and empowerment discourses, and an explosion of education. These cultural changes are transmitted through legal, accounting, and professionalization principles, driving the creation of new organizations and the elaboration of existing ones. The resulting organizations are constructed to be proper social actors as much as functionally effective entities. They are painted as autonomous and integrated but depend heavily on external definitions to sustain this depiction. So expansion creates organizations that are, whatever their actual effectiveness, structurally nonrational. We advance institutional theories of social organization in three main ways. First, we give an account of the expansive rise of “organization” rooted in rapid worldwide cultural rationalization. Second, we explain the construction of contemporary organizations as purposive actors, rather than passive bureaucracies. Third, we show how the expanded actorhood of the contemporary organization, and the associated interpenetration with the environment, dialectically generate structures far removed from instrumental rationality.